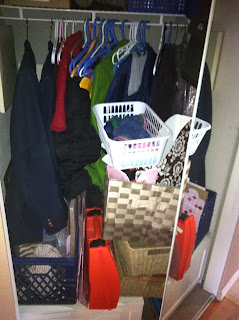 Hello everyone.  My name is Rachel.  And I am a recovering hoarder.  There, I said it.  For all of the purging and organizing I have done in our house in the last year, there are still areas of my life where I have to be able to admit that I have hoarding tendencies.
I’m not going to lie; I used to watch A&E’s Hoarders TV show as an impetus to tidy my house.  It was the only show on TV that I would watch with commercials. I forced myself to get up and tidy during the commercial breaks. Even if it was just to take the pile of magazines on the coffee table and put them in a nice, neat stack.  Or take the commercial break to run into the kids’ toy room and tidy until the scary music that began the next segment started.

Now, I’m not saying that my house was in any way, shape or form as bad as the people on the TV show, but some days it felt like the pile of clutter and toys and paper and kitchen items and clothes and shoes and STUFF was too much for me to dig through myself.
So, I enlisted some ruthless great friends, who fought me tooth and nail on everything helped me to realize that just because I someone had bought me a cottage shaped tea pot for my wedding I didn’t have to keep it if I never once had used it.  It took an entire weekend of intensive therapy decluttering to finally get my gears turning on how to bring my house to a state where it was less stressful and we were not surrounded by stuff.


All that being said, there are still some rooms/closets/corners in our house where there is a need for constant organization and decluttering.  The challenge for Week 3 on Project Simplify2012  is Closets, Countertops and Drawers (Oh My).  I needed to identify the space in my house where random things get dumped.
In our house, that’s the downstairs hall closet. It is a terribly small closet width-wise.  But behind the coat rack, the closet goes WAAAY back and around the back of the staircase.  Under the stairs is our storage space for our Christmas decorations, but the first half of the closet space is where my hoard of storage containers, Rubbermaids, baskets and bins are thrown stored. 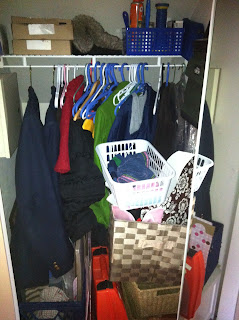 These are the BEFORE pictures of the closet that I am taking on this week.  Hopefully I’ll be able to make some progress and link up the after pictures by the end of the week!
Do you have a space in your house that you need to tackle? Good luck organizing this week!!