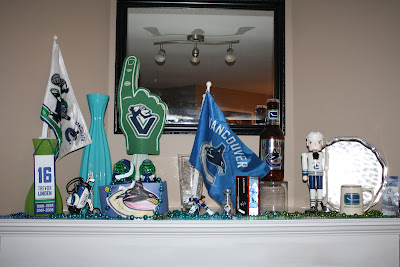 Everywhere I look in blogland these days, I see people posting photos of their holiday mantel. Now, I have never been a person to season up my fireplace (except for at Christmas), but today is the day. I didn't update it for the Spring Season, or for St Patrick's Day or for Easter.

I decorated my fireplace mantel for the most important season of all: Canucks Playoff Season. It's what we live for in my house. Literally. My children stand up and belt out their tiny little versions of Oh Canada every night no matter what team is playing. 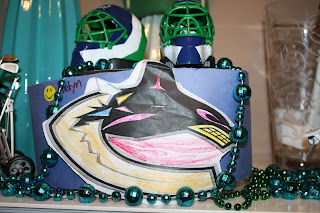 And on Canucks Game Day? OMG, it's insanity. Last season we had tv's setup on the stoops in our complex. The kids could play on their bikes while all of the adults (sometimes as many as 20 of us!) watched the game from our lawn chairs on the driveway! 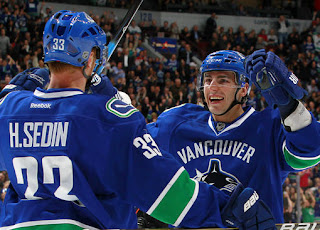 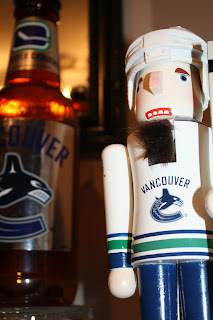 As the Canucks enter the post season tomorrow night against the LA Kings, I knew that I needed to break out the Canucks gear and set it up. In years past, the Canucks paraphernalia was strategically placed on the TV stand.


This year I thought I would take my cues from blogland and setup a full-on Canucks mantel. Hopefully it stays up right through the entire NHL playoffs, and doesn't come down until they win the biggest trophy in sports. 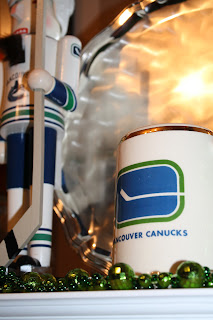 On our living room mantel you'll find: a couple of our car flags (they don't really fit on the minivan when I park in the garage), 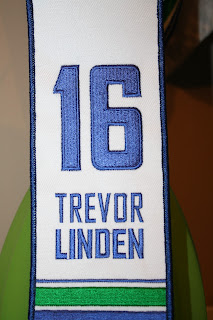 Trevor Linden's retirement banner (best game of my life, I cried for an hour!), the head band thing that Aidyn made at preschool last year, a little wee Stanley Cup I got on Ebay, and our MOST prized Canucks possesion... 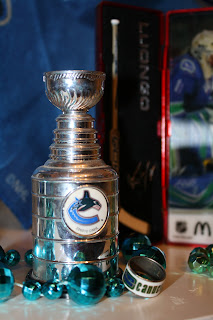 The hubs had an aunt and uncle who passed away a number of years ago. Uncle Harry and Auntie Trudy were big time Canucks fans. When Auntie Trudy passed away, hubs inherited a 1982 Canucks Playoff Mug and a tiny little Canucks ring. They are awesome, and we treasure them. Hopefully they will bring our team luck. 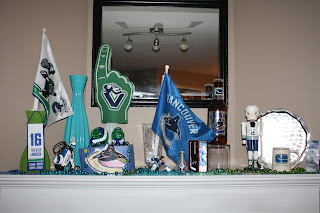 And if you need some more inspiration: