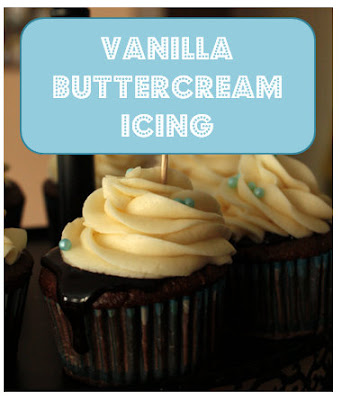 Good afternoon everyone! Hope you are having a super fantastic day!! This is a crazy busy week for our family, it seems like I am running all over town playing chauffeur for the kids – even more than usual! 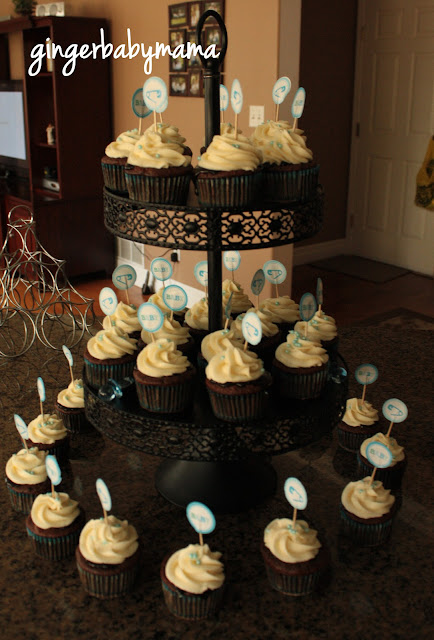 I found the time to make some super delicious, made with love cupcakes for some special ladies over the weekend. I made a batch for my younger sister’s baby shower on the weekend. These delicious little nibbles were chocolate cupcakes from this recipe, topped with chocolate fudge sauce and vanilla buttercream. 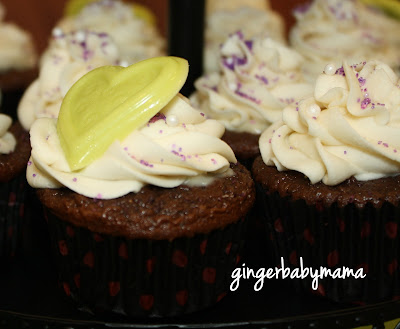 I also made these yummy desserts for a friend’s bridal shower at work this week. These are chocolate cupcakes (again from this recipe), filled with Jello Cheesecake Pudding and topped with vanilla buttercream. I have been asked time and again for my icing recipe, and since it certainly isn’t a trade secret, I thought I may as well share it here for all of you! 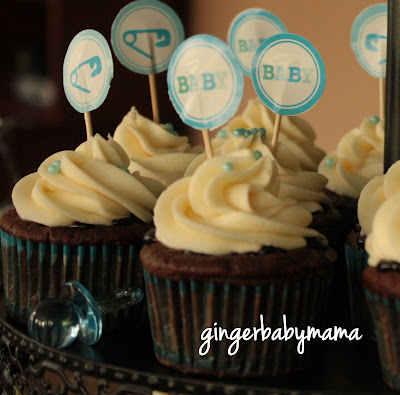 I have been making this very basic vanilla buttercream recipe for years. I am not sure where it originally came from, because I don’t need the recipe anymore, it’s stored in my head! 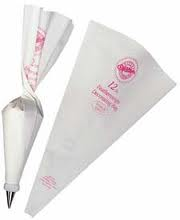 No cupcake is complete without a fancy swirl of icing on top, am I right? The swirl which looks so fancy and difficult is actually really really really easy! I use a 16” featherweight Wilton icing bag (though a smaller one would be fine, I just tend to bake in BIG batches, so I need a BIG bag to hold the icing) and a Wilton 1M icing tip. To make the swirl stand nice and tall, pipe a little wee star in the middle of the cupcake, then pipe in a circle around and over the star. That’s it! See? I told you it was easy!! 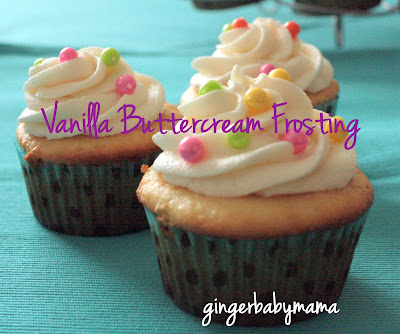 1 cup butter, at room temperature (don’t take it out of the fridge and thaw in the microwave, it never turns out right… just leave it on the counter until it’s nice and soft)
1 tablespoon vanilla extract (yes, one tablespoon!)
4 cups icing sugar
2-4 tablespoons of milk, a splash at a time

In the bowl of your stand mixer, beat the butter until light and creamy. Add a tablespoon of vanilla extract and mix another 20 seconds until well combined. Add the icing sugar, one cup at a time, beating between each addition.

When all four cups of icing sugar have been added, leave the mixer a-mixing for another minute or so, you’ll find it will come together a bit more. At this point, add milk, one tablespoon at a time until you reach the desired consistency for your icing. I like my piping icing to hold up, and be sort of the consistency of room temperature butter. If I was using the icing to frost a cake, I would add a bit more milk to thin it out. 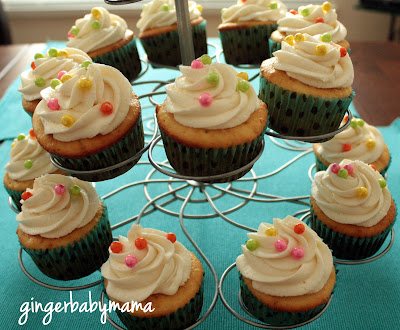 Assemble your icing bag, with the coupler and the tip, fill the bag, and get piping!! If you are new to piping icing, lay some wax paper on the counter and practice! Anything you pipe you can throw back into the bag and use again. This icing also colors well. My favourite icing colors are made by Duff. You can also freeze this icing if you make a huge batch and have leftovers. Just put the icing into an airtight container and use it the next time you are baking.

Linking to Joyful Homemaking, Not Just a Housewife and A Bowl Full of Lemons.
Posted by GingerBabyMama at 23:02